March 24, 2003
Available now are texts of lectures given at the Moscow Institute of Physics and Technology within Non-proliferation and Reduction of Weapons of Mass Destruction Regime and National Security course offered by our Center:

The United States started a military operation against Iraq. Russian officials condemned this action as unlawful:

Russian State Duma postponed vote on new draft bill on ratification of the SOR Treaty indefinitely because of beginning of the US military operation against Iraq:

In his interview for Krasnaya Zvezda Col. Gen. Yuri Baluyevsky, First Deputy Chief of Russia's General Staff spoke on the Russia's and NATO's joint work on missile defenses for Europe: What Missle Defenses Does Europe Need, - in Russian, (by Oleg Falichev, Krasnaya Zvezda, March 20, 2003). On possible cooperative work on development of missile defenses together with other countries see also:

Russian Ministry of Foreign Affairs stated that Russia made a decision to exempt foreign participants of assistance programs under Multilateral Nuclear Environmental Program in the Russian Federation (MNEPR) from value added tax (VAT) and other levies, which allowed to agree ad referendum the main text of the Draft Agreement (Russian MFA Press Release on the Results of Negotiations on the Draft Agreement on the Multilateral Nuclear Environmental Program in Russia, March 22, 2003).

According to US media, North Korea is experiencing difficulties activating a nuclear fuel processing plant:

March 17, 2003
Russian media comment on the new draft bill on ratification of the SOR Treaty recently sent to the State Duma by president Putin. Vote on the bill is scheduled for March 21, 2003.

At their meeting in the Azores, leaders of the US, Britain and Spain stated categorically that diplomatic efforts to settle the Iraq crisis would be stopped on Monday:

"...Islamabad approached official nuclear weapons states with a request to equip Pakistani and Indian ballistic missiles with a special electronic protection system. It allows to block detonation of warhead even if missile is already launched. They were refused due to a provision of the Non-proliferation treaty which covers information on protection systems in particular... After the refusal, Islamabad proudly stated that nuclear protection issues were their own business and that nobody else would solve them. But when this problem becomes Pakistani own one, it will apparently be too late to solve it..." (Pakistani Nuclear Arsenal, in Russian, (by Alexandr Andreyev, Krasnaya Zvezda, March 13, 2003)

US use of anti-tank penetrators with depleted uranium during the 1991 Gulf War caused a wave of criticism from environmentalists. Pentagon held a briefing for journalists at which issues of collateral damage due to radioactive contamination have been discussed: US DoD Briefing on Depleted Uranium, Friday, March 14, 2003

March 13, 2003
Russian President Vladimir Putin sent the new draft bill on ratification of the Strategic Offensive Reductions Treaty to the State Duma. The draft bill was prepared by a special work group created in Russian parliament. For further details see exclusive article by Pyotr Romashkin, a defense and security expert with "Yabloko" faction in the State Duma: New Draft Bill on Ratification of the SOR Treaty, - in Russian, (March 12, 2003).

The US unanimously approved the US-Russian Strategic Offensive Reductions Treaty last week. The Senate defeated two amendments to the treaty ratification resolution. One would have required Senate approval before the United States could withdraw from the treaty. The second amendment would have required annual intelligence reports on treaty compliance.

Last week, US House of Representatives held hearings on the US-Russian "Cooperative Threat Reductions" (CTR) program. Insufficient efficiency of spending under this program has been acknowledged. Transcripts of statements by US administration officials are available online:

The Pentagon made its case to Congress for its requested repeal of a 9-year-old ban on developing low-yield nuclear weapons intended:

Nautilus Institute published a secret 1967 government study on the possible use of tactical nuclear weapons in the Vietnam War that was recently declassified under Freedom of Information Act:

A US federal judge has dismissed a suit against a contractor for the nation's antimissile defense system. The suit was brought by Dr. Nira Schwartz, who has long argued that the key component of the system is flawed and that the company and the government have conspired to cover up its problems. The judge agreed with the government's contention that national security would be endangered if the suit went forward (Missile-Defense Critic's Suit Is Dismissed, by William J. Broad, The New York Times, March 8, 2003)

On the development of US missile defenses see also:

In the recent issue of Arms Control Today (March 2003):

Reports by the chief UN weapons inspector Hans Blix and IAEA director general Mohamed ElBaradei deepened a split within the UN Security Council over the US drive to win international support for a military strike. The United States and the United Kingdom decided not to call for a UN Security Council vote last Tuesday, as they had originally planned after it became clear that their draft resolution will not win support of the UNSC nine members. French President Jacques Chirac said that his country would vote "no" on the current draft resolution. Statements by Russian Foreign Minister Igor Ivanov can also be considered as readiness to vote against the resolution:

March 4, Carnegie Moscow Center held a conference on "North Korea: Issues of Foreign, Domestic and Nuclear Policy." Leading experts from the Institute for Far East Studies, Institute for World Economy and International Relations, and other governmental organizations spoke at the event. On the further development of the North Korea crisis see also:

In the recent issue of the Bulletin of the Atomic Scientists (March-April, 2003):

March 10, International Conference on Security of Radioactive Sources began in Vienna, Austria. The conference is organized by the IAEA, co-sponsored by Russian and US governments. More than 600 experts from 110 countries and relevant international organizations took part in the conference.

On the danger of nuclear terrorism see also:

At the Russian STAR Bulletin Board: arms control chronology and other topics.

March 3, 2003
"...The uncovered development tendencies of foreign military theoreticians and armaments of the military of NATO states, and strengthening impact of air and space attack forces, and of space weapons on the course and outcome of modern wars and armed conflicts could not go unnoticed... Nine years after legalization of the idea to build a nation-wide air and space defense system, determined by presidential decree of 1993 "On air defense of the Russian Federation", works on the air and space defense entered practical stage again...": Russian Builds Air and Space Defense, - in Russian, (by Boris Cheltsov, Sergey Volkov, Nezavisimoye Voyennoye Obozreniye, February 28, 2003)

"...Establishment of Russia-NATO council was a significant spur to cooperation between Russia and NATO in theater missile defenses...Main goal of cooperation in theater missile defenses within the framework of Russia-NATO council is to analyze and estimate possible levels of compatibility of corresponding theater missile defense systems of Russia and NATO, and to study possibility of activation of practical cooperation, including joint training and exercises...": Strategic Threat to Russian and NATO, in Russian, (by Robert Gregory Bell, Krasnaya Zvezda, February 27, 2003); author is NATO Assistant Secretary General for Defence Support. See also: Russian Proposals on Missile Defenses for Europe (in Russian).

Independent experts are seriously concerned over the US nuclear policy:

Classified US nuclear threat reports indicate that rogue states and terrorist groups have learned that they can make nuclear weapons with low-enriched uranium or materials obtained from spent nuclear fuel: 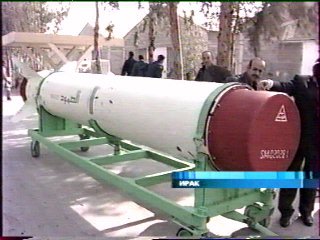 Despite the fact that Iraq began elimination of Al Samoud-2 missiles as demanded by inspectors, US keeps pressure on UN Security Council members to win support for their resolution, that approves start of military action against Iraq:

North Korea has restarted one if its research nuclear reactors at Yongbyon. North Korea's leader, Kim Jong Il has warned that nuclear war could break out if the United States attacks his country's nuclear program:

Russians are now more persuaded than they were before that Iran does have a clandestine nuclear weapons program, according a US official :