What was new on START Web site?

July 29, 2001
It is still unclear after a recent Moscow visit of U.S. National Security Adviser Condoleezza Rice, how the sides are going to achieve a compromise on the ABM Treaty. Official comments reveal no shift in previous attitudes:

According to U.S. experts, "...the nuclear posture review has a three phase design and time frame. The first phase includes retirement of 50 Peacekeeper "MX" missiles with 500 warheads, placement of single MX warheads on Minuteman III missiles, and reducing the Trident submarine fleet from 18 to 14 boats... The second phase would be to unilaterally reduce further to some 2,000 warheads. This would be done through "downloading" the number of warheads on submarines, and reducing the day-to-day nuclear committed force, including potentially reducing the level of alert. A new capability would be developed in the form of new "tailored" nuclear weapons to attack hardened and deeply buried targets... In the third phase, seen as possible by the end of the decade, forces would decline to 1,000-1,500 warheads, with still lower numbers of missile warheads, and bombers transformed into 'dual capable' airplanes like fighters, released from most of the day-to-day requirement to prepare for nuclear war...": The Emerging Nuclear Posture, (by William M. Arkin, The Washington Post, Monday, July 30, 2001; 12:00 AM)

"...The top defense priority for Russia is the Strategic Rocket Forces. They are currently not thus much dying as killed. The rate of deployment of palliative "Topol M"s is depressing... However, we are emphatically suggested the idea about determining importance of the strategic sea based forces... In spite of numerous problems with the sea based component, it is this leg of a nuclear triad one attempt to make an emphasis on in future. Though undersea nuclear fleets are becoming unjustifiably more expensive and unjustifiably dangerous element of current and future life of the world community..." (A Nuclear Undersea Surplus, - in Russian, by Sergei Brezkun, Nezavisimoye Voyennoye Obozreniye, July 27, 2001)

A U.S. anti-missile weapon was able to destroy a test warhead in space on July 14 partly because a beacon on the target signaled its location during much of the flight:

A leading critic of the military's missile defense testing program Professor Theodore Postol has accused the Pentagon of trying to silence him and intimidate his employer, the Massachusetts Institute of Technology, by investigating him for disseminating classified documents: M.I.T. Physicist Says Pentagon Is Trying to Silence Him, (by James Dao, The New York Times, July 27, 2001). See also previous publications on a conflict between Prof. Postol and Pentagon.

Carnegie Moscow Center published a new report of Andrei Zobov Russian Security, Iran, and American Sanctions, - in Russian (Supplement to Nuclear Proliferation Journal. Issue #1, 2001). The author focuses on the issues of Russia's assistance to Iran's nuclear missile programs and the transfer of "sensitive" technologies, as well as the perspectives of development of Russian-American relations in the light of the Iranian factor and ways of surmounting disaccord in the question of nuclear missile potential of Iran.

At the Russian START Forum: on Pavel Podvig's paper in Izvestia and other issues.

July 26, 2001
President Bush and President Vladimir V. Putin agreed to link discussions of American plans to deploy a missile defense system with the prospect of large cuts in both nuclear arsenals:

In a comment published today in Izvestiya, Pavel Podvig, an expert with our Center underscored that: "...continuing appeals to save the ABM Treaty at 'any price' give rise to concern. The price may become too high. There is only a hope that consultations agreed by Russian and U.S. Presidents will not end up with repetition of old postures ...": Illusions of the Treaty, - in Russian, (by Pavel Podvig, Izvestiya, July 26, 2001). See also:

U.S. National Security Adviser Condoleezza Rice arrived in Moscow on Wednesday to put arms control talks with Russia on a fast track, saying the two sides had broken the deadlock on missile defense. The United States does not intend to amend the Anti-Ballistic Missile Treaty to allow for the development of a missile defense system but will instead seek Russia's agreement for both countries to withdraw from the accord, administration officials said Tuesday.

Russia's defense minister indicated the country was willing to consider changes to the Anti-Ballistic Missile Treaty, giving encouragement to Bush administration officials who told Congress they have made progress in the diplomatic sales job for a missile defense shield.

The Bush administration plans to test a space-based laser interceptor as early as 2005 as part of its ambitious new missile defense agenda:

At the Russian START Forum: U.S. motives to reject CTBT and other issues. 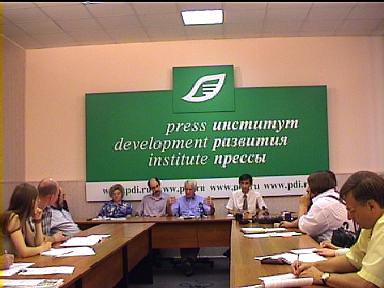 Executive Summary of the recent our Center's report U.S.-Russian Relations in Nuclear Arms Reductions: Current State and Prospects, (Anatoli Diakov, ed.) is now available in English. See also a transcript of the press conference (in Russian) held on July 3rd, 2001 at the National Press Development Institute.

The Pentagon reported that the fourth attempt to shoot down an intercontinental missile succeeded on July 14. A projectile launched from a prototype missile defense system on the Marshall Islands successfully intercepted a dummy warhead, which had been launched 29 minutes earlier from Vandenberg Air Force Base in California. Pentagon plans for 4 to 6 more flight tests of the NMD elements before the end of the year. Eugene Miasnikov, the Editor of the START Web site said to Izvestia correspondent, that "...the test was not a violation of the ABM Treaty. One may speak about a violation, for instance, if the US start to deploy interceptors at Alaska... As to testing an antimissile airborne laser, this is not going to happen soon... Russia should think over a rational strategy, strictly define what it wants... Thus far, there is no common language in the (US-Russian) dialog..." (A Different Geometry, - in Russian, by Svetlana Babayeva and Yekaterina Grigor'yeva, Izvestiya, July 17, 2001). See also:

Russia and China signed a treaty on good neighborly friendship and cooperation yesterday. Both sides expressed importance of the ABM Treaty of 1972.

American embassies have been warned that planned missile defence tests will come into conflict with the 1972 Anti-Ballistic Missile Treaty within "months, not years". The warning, in a 14-page memorandum, gives the first indication that the treaty may be violated much sooner than Western governments had been led to believe. Russian MFA expressed surprise concerning this issue.

In an exclusive interview to Corriere Della Sera President Vladimir Putin again stressed an official Russian approach toward US plans to deploy NMD - abrogation of the NMD Treaty will lead to a collapse of the arms control regime:

Secretary of State Colin L. Powell said on Saturday in an interview at the State Department that the United States "needs an understanding, an agreement, a treaty, something with the Russians that allows us to move forward with our missile defense programs":

The Bush Administration plans wide-scale testing of their "limited missile defenses" in Alaska, where construction of launch sites for NMD missiles was supposed to begin this Fall:

The Committee on Government Reform has obtained a Pentagon report critical of the national missile defense testing program. The report, compiled by Philip Coyle, former Director of Operational Test and Evaluation in the Defense Department, reveals severe deficiencies in the Pentagon’s plan to test missile defenses: The Coyle Report: A Comprehensive Pentagon Study Criticizing the National Missile Defense Test Program

The commander of US strategic nuclear forces has forcefully, though indirectly, challenged President Bush's plan to slash the number of warheads and take intercontinental ballistic missiles off "hair-trigger" alert: Nuclear Arms Chief Questions Cut in Warheads, (by Walter Pincus, The Washington Post, Sunday, July 15, 2001; Page A06)

A Bush administration review of American assistance to Russia has concluded that most of the programs aimed at helping Russia stop the spread of nuclear, chemical and biological weapons are vital to American security and should be continued: U.S. Review on Russia Urges Keeping Most Arms Controls, (by Judith Miller and Michael R. Gordon, The New York Times, July 16, 2001)

Russian experts at the Kurchatov Institute, the renowned nuclear research center in Moscow, recently found what appears to be a critical deficiency in the internal U.S. system for keeping track of all bomb-grade nuclear materials held by the Energy Department -- enough material for tens of thousands of nuclear bombs: Nukes: A Lesson From Russia, (by Bruce G. Blair, The Washington Post, Wednesday, July 11, 2001; Page A19)

US and UK media reports that the US intends to break the nine-year moratorium on nuclear testing and to withdraw from the Comprehensive Nuclear Test Ban Treaty. This conclusion has been made based on a report made by authorized officials from the Bush Administration on the timing of preparation for new experiments on the Nevada test range:

At the Russian START Forum: on the reasons for US intention to renew nuclear tests, and other topics.

The main outcome of the Russian-French summit was the signing of a joint declaration on strategic stability:

Russia proposed that the five long-established nuclear powers start multilateral talks aimed at eliminating 10,000 warheads in the next seven years:

Colonel-General Leonid Ivashov, who heads the Russian defense ministry's department of international military cooperation, said that the ABM Treaty could be subject to modifications, but ruled out any changes that would allow US to deploy NMD:

How to untangle the mass of incompatible and self-contradictory Russian and American positions on the ABM Treaty? Alexei Arbatov, Deputy Chair of the Defense Committee of the State Duma believes that first of all, recently made decisions on the development of strategic nuclear forces, which are very vulnerable from the strategic point of view, have to be revised: Once Again on Missile Defenses. Is the Formula of Stability Attainable?, - in Russian, (by Alexei Arbatov, Nezavisimaya Gazeta, July 4, 2001). See also:

After months of delay, the Pentagon said Friday it will attempt to shoot down a missile outside the Earth's atmosphere on July 14, the first missile defense test of its kind since a failed intercept one year ago.

On June 28 the Bush administration submitted to the Congress the amended budget for the Department of Defense of $329 billion, which means the net increase of $18.4 billion -- a record sum over the last two decades. The amended budget provides for almost a two-fold increase of NMD allocations compared to current year -- just under $8 billion:

Russian Foreign Ministry issued a statement that welcomes the Washington's initiative and expresses belief that the dismantling of the MX ICBMs and their launchers will be carried out by the American side with due consideration of the provisions and procedures envisaged by START-1 (Russian MFA Press Release, July 3, 2001). See also:

President Bush's new concept of deterrence in the post-Cold War world stands in sharp contrast to deterrence strategy outlined in a newly released but once classified study done by the U.S. Strategic Command in 1996: Military Study Mulled Deterrence of 'Fear', (by Walter Pincus, The Washington Post, Thursday, July 5, 2001; Page A09)

Proceedings of the international conference "Partnership for Peace: Creation of Long-term Cooperation on North-East Asia Security" held in Fudan University (Shanghai, China) have been published. Well-known arms control experts from US, China, Russia, Japan and South Korea took part in the meeting.

Bush administration's energy plan is a reference to an alternative approach to disposing of radioactive waste from nuclear power plants. "Reprocessing," the plan asserts, could help alleviate one of the major drawbacks to nuclear energy:

Russian Federation Council passed the bill that allows to import spent nuclear fuel into Russian territory. Two other bills from the "nuclear package" were sent to the President without hearings. Final decision on the import of spent nuclear fuel (that would allow Russian to earn $1 billion a year) will be made within a month:

At the Russian START Forum: START I limitations on movement of mobile missiles, and other topics.