What was new on START Web site?

December 25, 2001
The Russian side hopes to work out an agreement with the United States on the next step of nuclear reductions by June, 2002:

Officials and experts comment on the US withdrawal from the 1972 ABM Treaty:

The Pentagon and the Energy Department submitted Report to Congress on the Defeat of Hard and Deeply Buried Targets (a PDF file). The report stresses the need for development of new mini-nukes to fulfil this task:

December 18, 2001
Last week's major event was the US formal notice on unilateral withdrawal from the 1972 Anti Ballistic Missile treaty. Moscow's reaction was very quiet, although Kremlin did call it a mistaken move:

The United States and Russia will begin talks next month on how and when to make cuts in their strategic nuclear arms, despite continued disagreement over an anti-missile treaty, Defense Secretary Donald H. Rumsfeld and Russian Defense Minister Sergei Ivanov announced Monday.

"...The major negative consequence of the [US] withdrawal from the 1972 ABM Treaty is the detriment to bilateral international law system developed for reductions of the strategic offensive nuclear weapons because the ABM treaty was a constituent part of the START I (US and Russia are reducing their arsenals in compliance with this treaty), and of the START II that did not enter into force. According to the Federal bill on ratification of the START II treaty, Russian Federation shall denounce the START II treaty, if US withdraws from the 1972 ABM treaty. This will allow Moscow to deploy MIRVed warheads on Topol-M (SS-27) ICBMs, as well as to extend service life of the heavy missiles," believes Pyotr B. Romashkin, aide to a member of the State Duma (Exclusive: U.S. Withdrew from the ABM Treaty. What's Next?, December 14, 2001 - in Russian)

Pavel Podvig, an expert with our Center believes, that "...apparently, they counted on that refusing to find a compromise over missile defenses would help Russia put all responsibility for the breakup of the treaty on the US. This goal can be considered as an achieved one (but then, all is not that simple, some suspicions that this was done not without Russian consent, remain). However, what will Russia obtain except of the moral satisfaction? Absolutely nothing..." (Left with a Broken Treaty, - in Russian, by Pavel Podvig, SMI.RU, December 13, 2001).

Most experts condemn what has been done by the US:

According to American officials, US is ready to discuss the problems of strategic stability with China in order to remove the latter's concerns regarding US missile defenses:

A flight test of a prototype booster rocket for missile defense failed: A Setback for Missile Shield as Booster Rocket Fails Test, (by James Dao, The New York Times, December 14, 2001)

The Pentagon has canceled a Navy Area Missile Defense Program due to poor performance and projected future costs and schedules:

A report, prepared by participants of a joint Russian-US project on the analysis of MOX-fuel use in VVER-1000 reactor, considers the issues of nuclear safety for storage and transportation of fresh MOX-fuel and for storage of irradiated plutonium MOX-fuel: MOX LTA Fuel Cycle Analyses. Nuclear Radiation Safety, (Joint U.S.-Russian Project to Update, Verify and Validate Reactor Design/Safety Computer Codes Associated With Weapons-Grade Plutonium Disposition in VVER Reactors, Moscow, 2000)

Independent experts claim that US nuclear sites are ill-prepared for anti-terrorist defense:

Plans for decontamination of the U.S. territories polluted by radioactive wastes become too expensive:

Russia will build at least four nuclear reactors at home and others in China, Iran, India and ex-Soviet republics as part of an ambitious plan to revive the atomic industry after the Chernobyl disaster, Nuclear Power Minister Alexander Rumyantsev said Monday

Import of nuclear wastes to Russia remains to be one of the hot topics in the media:

At the Russian START Forum: Russian policy over ABM and strategic nuclear forces, and other topics. 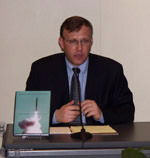 The Bush administration is aiming to reach a written agreement with Russia over deep cuts in nuclear weapons by the middle of next year even if the two sides fail to close a deal allowing the United States to proceed with testing of a missile defense system.

The period of strategic offensive arms reductions provided by the Treaty on Reduction and Limitation of Strategic Offensive Arms (START-1 Treaty) ended on December 5. Although all parties declared fulfillment of their obligations under this Treaty, Russian Foreign Ministry statement stressed that Moscow has questions for Washington "...relating to the fulfillment of a number of obligations under this Treaty".

As revealed by Nautilus Institute senior researcher Hans M. Kristensen, Air Force maintains the B-1 bomber in a Nuclear Rerole Plan intended to return the aircraft to nuclear-strike missions within only six months despite the fact that they were declared by the US as shifted to non-nuclear role and excluded from the START II treaty: The Unruly Hedge: Cold War Thinking at the Crawford Summit, (by Hans M. Kristensen, Arms Control Today, December 2001)

A fierce struggle is under way among senior Pentagon officials over whether to restart production of the most expensive aircraft in history, the B-2 stealth bomber: New Pentagon Debate Over Stealth Plane, (by James Dao and Eric Schmitt, The New York Times, December 11, 2001)

Recent Special Supplement to Yadernoye Rasprostraneniye (No 2, 2001) is "The Role of Russian State Duma in Ratification of Treaties over Arms Control and Non-Proliferation of Weapons of Mass Destruction (1994-2001)" by Aleksandr Tarasov, adviser to the State Duma Committee on International Affairs.

The Bush administration completed revision of the HEU-to-LEU program. They agreed for additional purchases of Russian uranium reprocessed after removal from the warheads, but declined the Moscow's idea on delivery of commercial nuclear fuel: The Bush Administration Gives "Green Light" to Preparation of a New Contract on Delivery of Russian Uranium to the USA, - in Russian, (ITAR-TASS, December 6, 2001)

The possibility of nuclear terrorism remains in the focus of Western media. Most of the observers believe that Russia can be the main source of the leakage of nuclear materials.

As revealed by environmentalist activists, the off-shore firm Energy Invest and Trade Corporation, that is responsible payer to Russia for import of nuclear wastes from Bulgaria, ceased to exist about six months ago:

The Department of Energy has changed the rules for a proposed permanent nuclear waste storage facility in Nevada so that the government no longer must prove that the site's underground rock formations would prevent radioactive contamination of the environment: DOE Amends Rules on Nevada Nuclear Waste Site, (by Eric Pianin and Peter Behr, The Washington Post, Tuesday, December 11, 2001; Page A09)

December 4, 2001
The Ballistic Missile Defense Organization (BMDO) announced today it has successfully completed the ITF-7 test involving a planned intercept of an intercontinental ballistic missile target. According to Lt. Gen. Ronald T. Kadish, Director of BMDO, the test had been simplified in order to comply with the 1972 ABM Treaty:

Union of Concerned Scientists released a working paper that examines the first four intercept tests of the ground-based midcourse national missile defense system being developed by the US, as well as plans for the fifth test. They find that the current test program is still in its infancy, and that the US remains years away from having enough information to make an informed decision on the deployment of even a limited nationwide missile defense system: An Assessment of the Intercept Test Program of the Ground-Based Midcourse National Missile Defense System, (by Lisbeth Gronlund, David Wright and Stephen Young, Union of Concerned Scientists Working Paper, November 30, 2001

The U.N. General Assembly on Thursday voted 84-5 with 61 abstentions in favor of maintaining the ABM treaty, which governs American and Russian missile defenses

Russia made no concessions to Washington on strategic weapons and missile defense, said Colonel-General Yury Baluyevsky, first deputy head of the General Staff. He also said that although Washington had not violated the 1972 Anti-Ballistic Missile Treaty by missile defense tests, there were signs that it was close to doing so:

Secretary of Defense Donald H. Rumsfeld reiterated in his interview with NBC on Sunday, that it is necessary to find a new framework for the US-Russian relationship. He said that "we have to set the 1972 ABM Treaty aside so we can do the kinds of testing that is necessary." (Secretary Rumsfeld Interview with NBC Meet the Press, Sunday, December 2, 2001). See also:

"...Currently , we can speak with confidence not only about the necessity and possibility to create space-based means to control the deployment of nuclear weapons in space, but also about the technical feasibility of this project..." (US NMD: The Problem of Nuclear Weapons In Space, - in Russian, by V. Kruglov, S. Dymov, Obozrevatel - Observer, December 2001)

Debates over the outcomes of the November Summit continue.

In the recent issue of Yaderny Kontrol, (September-October, 2001, - all in Russian):

U.S. intelligence agencies have recently concluded that Osama bin Laden and his al Qaeda terrorist network may have made greater strides than previously thought toward obtaining plans or materials to make a crude radiological weapon that would use conventional explosives to spread radioactivity over a wide area, according to U.S. and foreign sources.

The Head of Minatom speaks on nuclear materials detectors and on cooperation with China and Iran: Interview with Alexander Rumyantsev, Minister of Atomic Energy, - in Russian, (by Dmitri Gubin, Radio Rossii, November 29, 2001)

Russian Minister of Atomic Energy Alexander Rumyantsev and new Head of the US DoE Spenser Abraham, who is on his first official visit to Moscow, discussed the issues of full-scale strategic cooperation. Observers note that a lot of problems piled up in the relations between the two authorities. The Russian weapon-grade plutonium disposition program and HEU-LEU program are not exceptions.

A plan to bury tons of nuclear waste at Yucca Mountain in Nevada faces hurdles:

Vienna, Munich, Verona and many other European cities would have to be "totally destroyed" by nuclear missiles if an armed conflict flared up in Europe according to a Warsaw Pact plan of 1965: Nuclear Suicide, - in Russian, (by Andrei Terekhov, Vremya MN, December 1, 2001)

At the Russian START Forum: elimination of Russian strategic rail-mobile missiles and other topics.