"...[SORT treaty] really is the correct joint political decision under present conditions, a decision that does not contradict the national security interests of Russia, the US, or anyone else...", (Opinion: There Is No Strategic Offence - Strategic Defense Problem, by Valery E. Yarynich, November 24, 2002)

"...The absence of conceptual section made SORT treaty absolutely senseless. As US Senate hearings show, American side is not going to carry out reductions of strategic arms in the same way as Russian side understood them -- along the lines of the START I Treaty..." (A Treaty that Works Against Us, - in Russian, by Pyotr Vladimirov, Pravda, November 22, 2002)

"...Building well-balanced strategic nuclear forces based on existing Strategic Rocket Forces would be most acceptable considering economic reality of our country, and would allow to maintain a level of strategic offensive arms comparable to the US's. Whereas repeated changes of priorities of development of nuclear forces, as well as not very sound strengthening of one of its components will bring Russia to very sad consequences..." (Time to Choose Priorities, - in Russian, by Vladimir Yevseyev, Nezavisimoye Voyennooye Obozreniye, November 22, 2002) 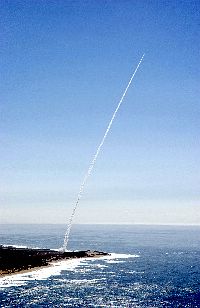 Because of the criticism for only conducting intercept tests during daylight hours, the US Missile Defense Agency plans to conduct a night test of a missile interceptor: Officials Plan Night Test for Ground-Based Midcourse Defense, (Global Security Newswire, Friday, November 22, 2002)

The US is trying to convince its allies in the necessity to support missile defence programs financially:

Delegations from more than 40 countries are expected to meet in The Hague Monday for a ceremony to launch the International Code of Conduct against Ballistic Missile Proliferation. Although such key countries as China, Iran, North Korea, Israel, India and Pakistan, have rejected the code:

Presentation of Alexandr Rumyantsev, Head of the Ministry of Nuclear Energy of the Russian Federation, at the 46th session of IAEA General Conference is available on-line: Russia Attaches Significant Importance to Perspective Issues of Handling of Spent Nuclear Fuel, - in Russian, (Bulleten' po Atomnoy Energii, November 22, 2002)

To pre-empt international questioning and provide more transparency in the US nuclear program, the United States should conduct all subcritical nuclear tests above ground in steel-walled containers, Frank von Hippel, chairman of the Federation of American Scientists and a Princeton University professor said:

The Mining and Chemical Combine in Zheleznogorsk for seven years makes produce that no one needs: Plutonium Hostages, - in Russian, (Alexandr Makarov, Vremya Novostey, November 25, 2002)

November 18, 2002
Text of a lecture on Political and Technical Aspects of International Nuclear Non-Proliferation by Dr. Vladimir Rybachenkov, Counselor of the Department of Security and Disarmament Affairs of the Russian MFA, is now available on-line (in Russian). The lecture was given on November 1, 2002 at the Moscow Institute of Physics and Technology within Non-proliferation and Reduction of Weapons of Mass Destruction Regime and National Security course offered by our Center.

Russian Ministry of Foreign Affairs expects the Strategic Offensive Reductions Treaty to be ratified by the Federal Assembly in December, Deputy Foreign Minister Georgy Mamedov said after his meeting with US Under Secretary of State John Bolton:

Vardo radar remains to be a factor that complicates relations between Russia and US and Norway: Have Stare Burdens Relations, in Russian, (by Alexei Lyaschenko, Krasnaya Zvezda, November 12, 2002). See also our special section: Vardo Radar: US Unfriendly Action or Violation of ABM Treaty?.

According to a recent review, Typhoon submarines will probably be used as testing platforms for new weaponry: Typhoons being repaired to operate until 2010, (by Igor Kudrik, Andrey Mikhailov, Bellona, November 13, 2002)

Last Wednesday, Iraq submitted a letter to the UN, in which they agreed to comply with the UN Resolution 1441. Russian MFA positively regarded this step by the Iraqi leadership. International inspectors are expected to arrive in Iraq on November 27.

North Korean state radio announced yesterday that the country has nuclear weapons, which it said were developed to defend against attack by American imperialists and called Washington to start working on a "non-aggression pact":

32 members of US Congress are suing the president -- they argue that before junking any treaty he is required under the Constitution to seek and obtain congressional assent: Taking Bush to Task on ABM -- And to Court, (by Matt Bivens, The Moscow Times, Monday, November 18, 2002)

US media voices concerns that the Bush administration is laying the groundwork for the resumption of nuclear testing and the development of new nuclear weapons. A new report by Carnegie Endowment for International Peace calls to a more thorough analysis of non-nuclear solutions to the problem of destroying underground bunkers that can hold weapons of mass destruction: Fire in the Hole. Nuclear and Non-Nuclear Options for Counter-proliferation, (by Michael A. Levi, Carnegie Endowment for International Peace, Working Paper, November 2002). See also:

See also comments on the conference discussions in the media:

United States, Russia and IAEA will jointly sponsor an international convention on radiological dispersal devices (RDD), or "dirty bombs," in March 2003 in Vienna:

On the problems of nuclear and radiological terrorism see also:

According to official sources, the US and Russia are close to finalizing a memorandum of understanding on jointly building and operating two experimental satellites to track ballistic missile launches under RAMOS program: Negotiators Near Joint Satellite Agreement, Global Security Newswire, Wednesday, November 6, 2002)

Pentagon's plans to deploy nuclear-capable B-2 bombers to the United Kingdom and the Indian Ocean island of Diego Garcia remain in the spotlight: Pentagon Moving B-2 Bombers To New Roosts Closer To Baghdad, (by John Hendren, Los Angeles Times, November 7, 2002)

The United States, Japan and South Korea called on North Korea to dismantle its nuclear weapons development program in a "prompt and verifiable manner". However, they failed to achieve a consensus on whether to punish North Korea for having broken its 1994 commitments or how to do it:

In the recent issue of Disarmament Diplomacy (October-November, 2002):

According to The Washington Post, in the 1970s, scientists in the former Soviet Union conducted an experiment known as Gamma Kolos, or "Gamma Ears" with the purpose to expose plants to radiation and measure the effects. All the experiments used a common source of radiation, a lead-shielded canister containing enough radioactive cesium 137 to contaminate a small city. Where are those radioactive materials now is unknown: Hunting a Deadly Soviet Legacy, (by Joby Warrick, The Washington Post, Monday, November 11, 2002; Page A01). On potential problems of nuclear terrorism see also:

November 4, 2002
Transcripts of two recent lectures presented over the course "Non-proliferation and Reduction of Weapons of Mass Destruction Regime and National Security" are available on-line (both in Russian):

Financial reality can torpedo Navy's optimistic hopes of shifting the center of gravity of the Russian nuclear strategic forces to the sea-based component: "Dolgorukiy" Has Not Got Enough For "Bulava", - in Russian, (by Sergey Putilov, Vremya MN, November 2, 2002)

State Duma ratified Agreement between Russia and Azerbaijan on the status, principles and conditions of use of the Daryal-type radar in Gabala, Azerbaijan. This radar is a part of the Russian early warning system:

The United States plans to deploy nuclear-capable B-2 bombers to the United Kingdom and the Indian Ocean island of Diego Garcia. This is the first ever decision to forward deploy this airplane:

Until recently the U.S. Air Force might not have been able to launch missiles from several of its silos in North Dakota because it kept poor track of its equipment and had inaccurate information on the readiness of its missile facilities, the Desert News reported:

Pentagon wants to accelerate production of the Patriot Advanced Capability 3 (PAC-3) missile interceptor, even though it has suffered test failures: U.S. May Speed Up Hoped-for Scud Nemesis, (by Bradley Graham, The Washington Post, Thursday, October 31, 2002; Page A19). On the US missile defense programs see also:

"...Now it is really interesting why Bushehr nuclear power plant is so attractive for us? The sum of $800 million that this project is estimated to cost sounded convincing so far. However, $20 billion offered by G8 for more than topical nuclear safety improvement in Russia under the only condition to stop nuclear cooperation with Iran sound even more convincing. 25 times more convincing. Which means that we, more specifically -- Minatom, are interested not only in money. Or not really in money? Then what?..." (Why Does Russia Need Bushehr?, - in Russian, by Sergei Shmakov, Politkom.ru, October 30, 2002)

Izvestia published an interview with IAEA Director General, who spoke about the goals of inspections in Iraq: Director General Mohamed ElBaradei: "Give Inspectors a Chance", - in Russian, (Izvestia, October 30, 2002)

Russia and China expressed their common conviction that complete denuclearization of Korean Peninsula is an ultimate goal of a political dialogue in the region. The demarche was taken in the light of the US reports that North Korea continues its nuclear weapons program: