Since the demise of the Soviet Union in December 1991 there has been a veritable flood of information on strategic weapons of the late "evil empire." This book - compiled by several nuclear weapon experts under the editorship of Pavel Podvig - provides the most comprehensive picture yet of Soviet efforts in this field during the 45 years of the Cold War. 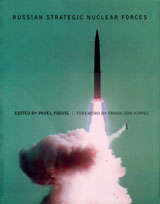 Beginning with overviews of the Soviet strategic nuclear force and the nuclear weapon production complex, the authors take the reader through the details of strategic offensive forces (ground, naval, and air) and strategic defenses, a discussion of Soviet nuclear testing, and an afterword addressing the post-Cold War state of Russian strategic nuclear forces. Beyond the excellent content of the book, the volume stands as a model for such surveys of military forces.

Proceedings readers will find the 103-page chapter "Naval Strategic Nuclear Forces" an invaluable resource. Written by Dr. Eugene Miasnikov and the late Dr. Maxim Tarasenko, it is extremely lucid as it takes the reader through the history of Soviet strategic missile submarines and then provides technical and operational descriptions of the vessels and their strategic weapons. Of particular interest are the chapter's sections on the structure, command and control, and support of strategic naval forces. Although relatively brief, these sections are very useful for the nonexpert.

The operational aspects of the Soviet ballistic missile submarine (SSBN) force were very different from those of the United States during the Cold War. Whereas the U.S. Navy sought to keep at least half of the available SSBNs forward deployed, the Soviet Navy maintained a much smaller number at sea, perhaps 15% to 25%, according to the authors. Other sources indicate an even smaller percentage. Soviet SSBNs in their home ports, however, were at a much higher state of readiness than their U.S. counterparts. Those SSBNs pierside would go to sea during a period of crisis. Even if no missiles were loaded, they would depart from port to rendezvous with missile replenishment ships. In addition, from the mid-1970s, when longer-range ballistic missiles became available, the Soviets developed the technique of launching missiles from SSBNs while in port.

This chapter contains line drawings of Soviet ballistic missile submarines and their missiles, as well as extensive data tables. The drawings are of little value, and there is a lack of coverage of Soviet strategic cruise missile submarines. The Soviet Project 659/Echo I and Project 675/Echo II nuclear-propelled submarines were developed specifically to attack land targets. Although those submarines later were refitted for the antiship role, there is some evidence their later missiles had a secondary land-attack capability, as did subsequent Soviet submarine-launched cruise missiles. The book lacks discussion of those submarines and weapons.

Among other anomalies in the book, the discussion of the SS-4 Sandal missile (Soviet R-12), which was the cause celebre of the 1962 missile crisis in Cuba, omits any mention of how many of those weapons were sent to Cuba and their state of readiness during the confrontation. And the book lists only a 2.3-megaton warhead for the SS-4. Sergei N. Khrushchev, however, in his outstanding book Nikita Khrushchev and the Creation of a Superpower (University Park, PA: PennState University Press, 2001), discusses the early SS-4 missiles as being fitted with a 1-megaton warhead, which was the warhead sent to Cuba.

Nevertheless, Russian Strategic Nuclear Forces is a major contribution to the literature of nuclear weapons and of the Cold War era. It also is a good read.

Mr. Polmar, a columnist and frequent contributor to Proceedings, is coauthor of Cold War Submarines: The Design and Construction of U.S. and Soviet Submarines, which will be published by Brassey's later this year.