April 28, 2003
Available now are texts of lectures given at the Moscow Institute of Physics and Technology within Non-proliferation and Reduction of Weapons of Mass Destruction Regime and National Security course offered by our Center:

Outcome of the Iraq war strengthened positions of those in the US administration who argue for preemptive actions. In the long run, this strategy can destroy non-proliferation regime:

On the ballistic missile threat and effectiveness of the Patriot theater missile defense system in Iraq War see also:

Pentagon acknowledged for the first time the intent not only to research the possibility to make low-yield nuclear weapons for destroying deeply buried targets, but to develop and acquire them:

Linton Brooks, administrator of the National Nuclear Security Administration, the Energy Department agency said that the United States has regained the capability to make nuclear weapons for the first time in 14 years and has restarted production of plutonium parts for bombs:

The US keeps up vane search for WMD in Iraq and objects to resumption of UN inspections:

Trilateral talks in Beijing did not produce a breakthrough. Declassified US Records shed light upon the Reagan and Bush administrations' approaches towards North Korean problems in 1980-s:

Pakistani "military atom" will never get into hands of extremists, according to a Councillor of Pakistani Embassy in Moscow: Our Nuclear Weapons in Reliable Hands, - in Russian, (by Gulam Khazur Bajva, Izvestia, April 22, 2003)

Chkalov Mining and Chemical Enterprise in Tajikistan, which was used for uranium enrichment for the Soviet nuclear program, is interested in Russian investments: Explosive in Underbelly, - in Russian, (by Bakhtier Khudoyberdiyev, Vremya MN, April 25, 2003)

According to US State Department official, the US expects to conclude a multinational accord with $1 billion in financing by year's end for the development of international program on utilization of weapons-grade plutonium:

On the nuclear terrorism problems see:

On everyday life of SRF garrisons see also: Yurya Does Not Give Up, - in Russian, (by Gennady Miranovich, Alexandr Dolinin, Krasnaya Zvezda, April 16, 2003)

In the recent issue of The Bulletin of Atomic Scientists (May-June, 2003):

The US Enrichment Corporation (USEC) announced the US-Russian "Megatons to Megawatts" program has so far eliminated about 175 metric tons of Russian highly enriched uranium — the equivalent of 7,000 nuclear warheads:

A trilateral meeting between representatives of the US, North Korea and China on settlement of North Korean crisis is scheduled for this week in Beijing. Russian Deputy Minister of Foreign Affairs Alexander Losyukov expressed a hope that the meeting will be a fruitful one, and will open prospects for a comprehensive solution in a wide format with participation of South Korea, Japan and Russia. US Undersecretary John R. Bolton in his recent interview for Arms Control Today spoke about US position on the settlement of the crisis:

April 14, 2003
The Russian legislature plans to resume its consideration of the Strategic Offensive Reductions Treaty:

Last week, Institute for Applied International Research hosted international conference on Russia within the "Group of Eight", devoted to the prospects and problems of international cooperation against proliferation of weapons and materials of mass destruction. See also:

Wednesday, US Senate Committee on Armed Services held hearings on US strategic forces. Transcripts of statements are available on the Web:

According to Pentagon, US missile defenses have been used against nine Iraqi ballistic missiles, and only four of those attempted intercepts have involved the PAC-3 system: Mid-Level Patriots Used Most Often for Iraqi Missile Intercepts, (by David McGlinchey, Global Security Newswire, Thursday, April 10, 2003)

Search for weapons of mass destruction in Iraq continues. US and IAEA are concerned about nuclear materials that could be stored at Al-Tuwaitha nuclear complex sealed by international inspectors in 1991:

CIA released unclassified report that assesses proliferation of weapons of mass destruction in countries of US concern:

April 9, three months passed since North Korea announced it was withdrawing from the Nuclear Nonproliferation Treaty. UN Security Council held a meeting on North Korea, but no statements or documents were made. Saturday statement by a DPRK Foreign Ministry was interpreted as Pyongyang's readiness to settle the crisis by diplomatic means:

April 7, 2003
Available now are texts of lectures given at the Moscow Institute of Physics and Technology on March 18, 2003 within Non-proliferation and Reduction of Weapons of Mass Destruction Regime and National Security course offered by our Center:

When visiting Space Forces Headquarters Russian president Vladimir Putin confirmed, that Moscow is still interested in ratification of the SOR Treaty despite disagreement over Iraq problem:

"Patriot PAC-3" Anti-ballistic missile system has a run of bad luck since the beginning of the current Gulf War. Last week, the missile defense system shot down another aircraft of Coalition Forces:

The United States and allies are still searching for Iraqi nuclear, biological, and chemical weapons —- so far without any visible results. Vladimir Fomenko, a senior expert with Minatom, who lead a UN operation on removal of Iraq nuclear arsenal in early 1990-s recalls the operation: No Tailors, No Needles, - in Russian, (by Sergey Leskov, Izvestia, April 7, 2003). See also:

Politicians and experts stress that US military action against Iraq undermines the basis of non-proliferation regime:

How war against terrorism affects non-proliferation regime -- see materials of September, 2002 meeting of experts in Paris that devoted to the subject: Nuclear Issues in the Post-September 11 Era, (Fondation pour la Reserche Strategique, March 2003)

Among other publications of the April issue of Arms Control Today see also:

If the US is to be successful in preventing Iran from building nuclear weapons, Washington has to change it's policy towards Russia, believes an expert with Monterrey Center for Nonproliferation Studies: Russian Nuclear Exports to Iran: U.S. Policy Change Needed, (by Cristina Chuen, Monterey Institute of International Studies, March 29, 2003). See also:

Experts and politicians comment on Russia-American agreement to shut down Russian reactors dedicated to the production of weapons-grade plutonium, which was signed in mid-March:

April 1, 2003
Russian Minister of Foreign Affairs Igor Ivanov speaking to the Federation Council of the Federal Assembly of Russian Federation called to postpone ratification of the Strategic Offensive Reductions Treaty. He said that right now it is not the best moment psychologically for putting it up for ratification, and that the issue could be attended later -- after the war is stopped: 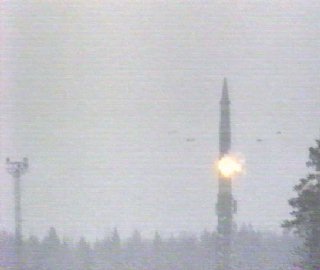 Wrapping-up command exercise of Strategic Rocket Forces, an SS-25 'Topol' ICBM was launched on March 27 at 12:27pm from a mobile unit at the State testing range Plesetsk. The missile stayed on combat duty for 18 years:

Missile defense experts said the Patriot Advanced Capability 3 missiles should be able to down the relatively slow and predictable Ababil missile. "Hitting these missiles is slightly more difficult than hitting an airplane," said prominent missile defense critic Ted Postol, a Massachusetts Institute of Technology professor. The Ababil missiles are considerably slower and less maneuvering than the Scuds making them a simpler target to shoot down by PAC-3 interceptor.

On the US missile defenses programs see also:

U.S. General Accounting Office released a report that analyses effectiveness of US-Russian Cooperative Threat Reduction programs. According to the report, US efforts to help secure Russian biological, chemical and nuclear weapons have been severely hindered by a lack of access to Russian WMD sites:

The issue is available online in PDF format.

Official Russian position over the Iraq crisis remains the same -- immediate cessation of military operations, and resumption of political settlement process under the aegis of UN Security Council:

On the Iraq crisis see also: Ivan Safranchuk, Director of the Center for Defense Information Moscow, Answers Questions by readers of Izvestia, March 27, 2003 - in Russian

US special search operations for weapons banned by UNSC did not succeed. The New Yorker published scandalous information that a set of documents purporting to show an attempt by Iraq to purchase uranium from Niger were faked by CIA.

Iran denied Russian suggestions that it was buying uranium enrichment equipment from Western suppliers after Russian Minister of Atomic Energy Rumyantsev said he was concerned about recent reports that a gas centrifuge found in Iran, was similar to those produced by the British company Urenco.

Further attempts of diplomatic settlement of North Korean crisis are taken as DPRK leadership deepens country's isolation from the rest of the world:

Russian Minister of Atomic Energy ALexandr Rumyantsev speaks on the Megatons to Megawatts Program and other topical problems of nuclear energy: Atom Always in Sight, - in Russian, (by Alexandr Yemelyanenkov, Rossiyskaya Gazeta, March 26, 2003)

On the environmental problems of nuclear cities and on radiological terrorism see also: