Remarks at the Workshop on Prospects for Russia-US Arms Control,2 Moscow, May 16, 2013

It is my pleasure to address this audience today and it is my honor to represent my views on this subject. I'd like to thank the organizers for this opportunity.

The idea of reducing strategic offensive arms below the ceilings provided for in the New START treaty began to be actively discussed well before the treaty was concluded in April 2010. It has been for a long time since Russian expert community has realized that before a new round of negotiations is launched three problems need to be resolved: the problem of ballistic missile defenses (BMD), the problem of non-strategic nuclear weapons (NSNW) and the problem of strategic conventional offensive arms. Events that followed after the New START was signed further strengthened this understanding.

Previous two sessions of our meeting dealt with exactly two of the problems mentioned. The problem of conventional strategic arms was mentioned just briefly, but it certainly deserves a separate discussion.

The subject of this session is further reductions in the strategic arsenals. First of all I'd like to outline status quo and prevailing trends in the development of strategic forces of the U.S and Russia.

The graph shows the forecast for strategic delivery systems development for the next 18 years provided that both parties adhere to the START treaty over this period of time. The numbers were calculated in accordance with the rules provided by the START treaty currently in force. Blue curves represent U.S. strategic systems, and the red ones - Russian systems. Dotted curves show aggregate numbers for deployed and non-deployed ICBM launchers, deployed and non-deployed SLBM launchers, and deployed and non-deployed heavy bombers. Solid curves show the number of deployed ICBMs, SLBMs and heavy bombers. Two solid red curves shown for Russian missiles and bombers represent two extreme scenarios of strategic forces development - the most optimistic and the most pessimistic ones. I'll elaborate on this later.

At the time being there is a lively discussion in the U.S. on renovation of nuclear triad and related issues. However, since existing delivery systems are to be preserved for at least fifteen years to come, any U.S. decision on replacement of delivery systems is unlikely to affect the blue curves any time before 2030. 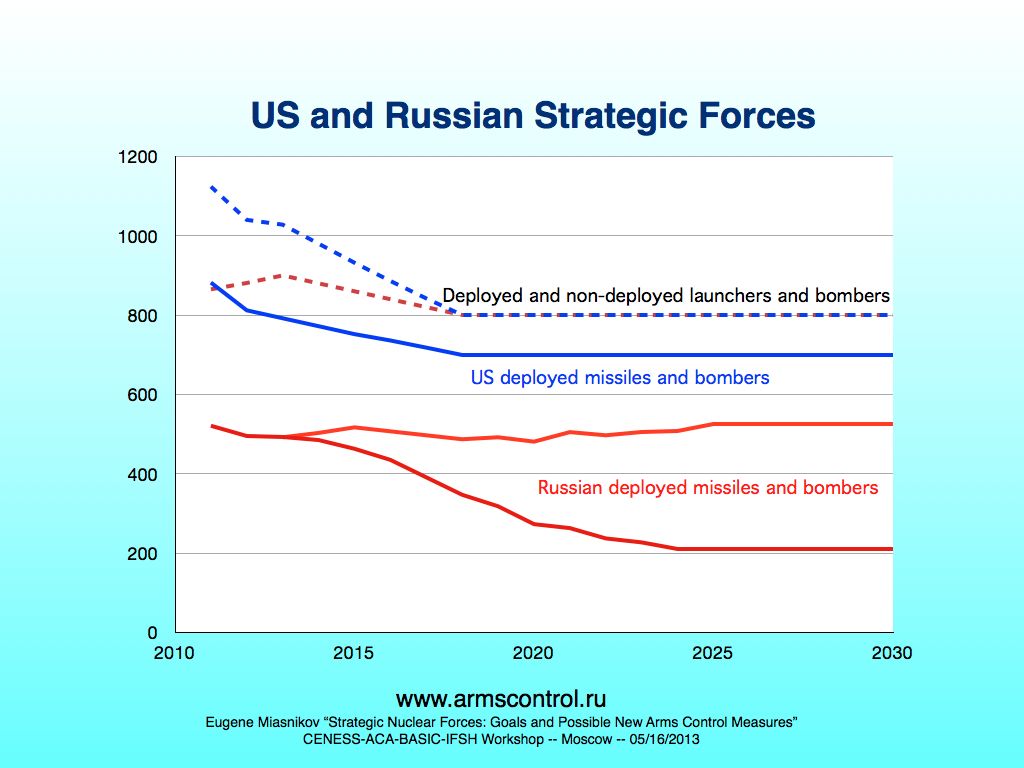 According to Pentagon's existing plans, all fourteen Trident strategic submarines will be in service till 2027 and one submarine a year will retire after that. Starting 2030, the U.S. Navy is going to get one new SSBN yearly to replace retiring submarines. Service life of "Minuteman" ICBMs is going to end not earlier than in 2030. Currently an option to extend it at least till mid 2070-s is under discussion. Heavy bombers will also be capable to carry out nuclear mission at least till 2030-2040s.

Unlike the U.S., Russia has long been replacing its nuclear triad. The process of phasing out old delivery systems (currently about 80% of total deployed delivery systems) will likely continue till mid-2020s. At the moment this process proceeds with a pace that is still faster than the new missiles are built.

The lower solid red curve assumes a hypothetic scenario that starting this year Russia stops deployment of new ICBMs and strategic submarines, but the Navy will still get the three SSBNs that are on final phases of production ("Yuri Dolgorukiy", "Alexander Nevskiy" and "Vladimir Monomakh"). The upper solid red curve represents a scenario when the Strategic Rocket Forces will receive 18 ICBMs yearly until 2025, and the Navy will commission one 955A Project SSBN each year (8 submarines altogether in accordance with the State Program for Armaments till 2020).

How realistic is the second scenario? The second graph shows new ICBM deployment rate starting 1997, when the first "Topol-M" (SS-27) came in service. This graph clearly illustrates that increasing the rate of ICBM production to 18 missiles a year will be highly problematic. The rate of commissioning of one strategic submarine a year will be even more challenging given existing production rates for submarines. 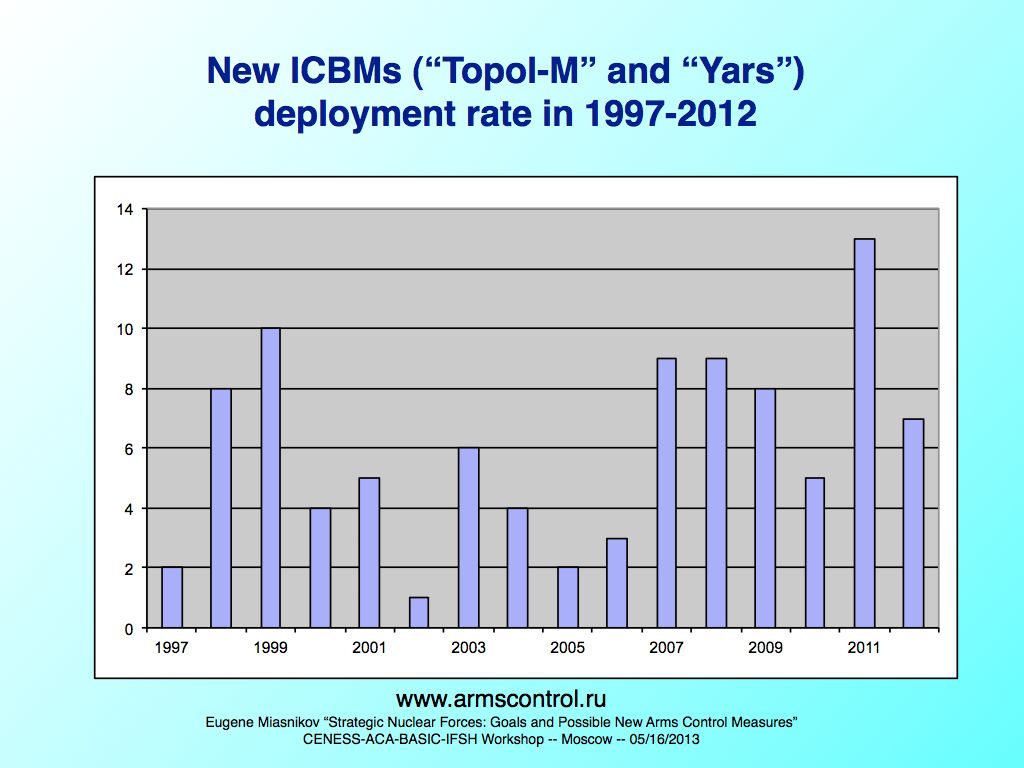 All this means that the next round of reductions will affect only the U.S. strategic offensive arms. We can hardly seriously discuss a possibility of concluding a new strategic arms reductions agreement for the reasons I mentioned in the beginning and also because Russia has nothing to reciprocate with.

Certainly, this situation was quite clear three years ago, when the New START was concluded. But at that time the United States was very keen on greater transparency with regard to the Russian strategic forces. The compromise reached back then can be described as follows: "unilateral reductions in exchange for greater transparency." Since the transparency issue is resolved until 2021, for as long as START will remain in force, it is hard to say what kind of a compromise can be reached now, if a new treaty is to be discussed. Some of our U.S. colleagues hope that Russia would be able to agree to cover non-strategic as well as non-deployed nuclear warheads by arms control measures. This is unlikely to happen any time during the next few years.

However, if the issues of BMD and strategic conventional arms are somehow resolved, Russia might reconsider its attitude toward non-strategic nuclear weapons. In any event, if a compromise is reached on development of BMD and conventionally armed strategic systems, then prerequisites for discussing transparency measures for NSNW might occur. This would represent a major step forward compared to the situation where we are now.

What alternative actions could be taken in order to reduce the level of strategic offensive arms and what could be objectives of those actions?

Many options are being discussed now, and, in my view, three of them deserve more detailed consideration:

The implementation of such initiatives could help to reduce the existing imbalances between strategic forces of the U.S. and Russia. The United States could save some money that it has to spend to maintain its strategic forces, which is an important factor at the time of the budget sequestering. The same could hardly be applied to Russia. Most likely, the initiatives above will not affect the pace of new strategic arms deployment in Russia. Therefore, the economic factor might be hardly a major stimulus for Russian decision makers. And, finally, in 2015 there is going to be NPT review conference where the U.S. and Russia will present their reports on compliance with Article VI of the NPT treaty. In this context implementation of one of the proposed options would be very timely and topical.

Russia can positively view the idea of accelerated implementation of START. It has already fulfilled its obligations with regard to two of the three START ceilings, and what remains to be done is to reduce the number of non-deployed strategic launchers. However, one needs to take into account one important factor. Accelerated implementation of START may involve some additional costs that are not in the budget yet, therefore it could be burdensome financially. This may affect not only the United States but Russia as well.

Importantly, in accordance with official data on START implementation over the last two years the number of Russian deployed delivery systems has been declining, while the aggregate number of deployed and non-deployed missile launchers and heavy bombers has been increasing. For financial or some other reasons, Russia is in no rush to eliminate its phased out strategic systems.

These circumstances may give the rise to another danger. The START treaty is extremely flexible in terms of options for elimination. In fact, the parties to the treaty can choose an elimination procedure for themselves, and such a procedure does not have to be irreversible. When the time is short to implement the treaty obligations, there might be a temptation to simplify elimination procedures under the pretext of cost savings. As a result, these reductions may prove to be only formal, the notion of reductions itself - devalued, and instead of being an instrument for building confidence, accelerated implementation of START may have an entirely opposite effect.

This is where I'd like to stop. Thank you for your attention. I'd be happy to take your questions.