Working out a common definition of strategic stability is an extremely difficult task, if it can be done at all. In an attempt to define strategic stability we need to keep in mind the goal of our efforts. Such a goal could be creating conditions for further nuclear reductions in the world.

At this moment further cuts are only possible provided that the key players are prepared to reduce their nuclear forces voluntarily. A necessary condition for such reductions is a confidence that nuclear arms cuts will not undermine survivability of smaller remaining nuclear forces, so that the deterrence missions could be fulfilled in any conceivable scenario of their implementation.

Regarding attitudes toward survivability of strategic forces, one has to conclude that U.S., Russia and China are at different positions.

Frankly, I do not remember hearing about any debates in the United States on survivability of their strategic forces for almost twenty last years. There is a wide consensus in the States that US strategic forces are survivable simply because there are ballistic missile submarines deployed at sea and there is no credible threat to them in the near future.

In contrast, most of Russian experts believe, that, as nuclear forces are reduced, ballistic missile defenses (BMD) and conventional precision guided weapons (PGW) will represent a growing threat to the Russian deterrent capability, as currently there are no limitations on development of BMD and PGW.

Chinese experts also see a growing threat to their strategic forces. One may not rule out that unlimited development of BMD and conventional PGW will prompt China to build up its own nuclear forces. In any event, expectations that China would become more transparent with regard to its nuclear arsenal do not seem well grounded at such circumstances.

Let me focus my today's talk on the problem of impact of precision guided conventional weapons on survivability of strategic forces. In my opinion, this topic has not been paid a due attention yet and our small international community of arms control experts is just beginning to realize this fact.

My view on this problem was presented in a report entitled "Precision Guided Weapons and Strategic Balance" that was published quite long ago. Let me briefly describe my observations of the situation.

Let's for a minute assume that precision guided conventional weapons do have a counterforce capability. If this is true, we will have to call in question several ideas that almost became dogmas amongst most of us.

In particular, if conventional weapons are capable to disable at least a part of silo based ICBMs, so that the latter could not be launched in the second strike, and there are no limits on deployment of conventional weapons with counterforce capabilities then the conclusion about stabilizing role of single warhead silo based ICBMs appears to be wrong. Thus, from the point of view of strategic stability there is no difference between single warhead or MIRVed silo based ICBMs. In a conflict both of them are in "use-or-loose" situation.

Let me give another example. The idea of de-alerting Russian and US strategic nuclear forces has many supporters these days. However, it is not difficult to realize that, if not limited, counterforce capabilities of conventional forces may significantly grow at reduced alert levels of nuclear forces. Thus, in an attempt to increase stability by de-alerting we will succeed exactly the opposite, because the survivability of nuclear forces will be reduced.

In this context the role of ballistic missile defenses looks a bit differently than it is usually portrayed by missile defense proponents. No BMD system can stop a massive first nuclear strike of an adversary. This fact is realized by any expert with a technical background. Nevertheless, in an absence of limits for deployments, a future BMD system may become capable to stop a second strike, which was significantly impaired by a preventive conventional strike. According to such a logic, precision guided weapons with counterforce capabilities may be referred to the first line of missile defense. Sometimes they are even called as "pre-boost phase" defenses.

Russian officials rarely articulate such a scenario, but I believe it is this scenario that they keep in mind when raise concerns about the threat of BMD deployment in Europe for Russian strategic missiles. Let me quote Amb. Anatoli Antonov (currently he is a Deputy Defense Minister). At one of the NATO-Russian Council meetings he said:1

In my view there is another reason why the topic of conventional PGWs is timely in a context of U.S.-Russian strategic arms reductions. Previous bilateral agreements implicitly did take into account the factor associated with such weapons.

The New START Treaty is designed in such a way, that though some of conventional strategic arms were covered by the treaty when it entered into force, they would cease to be subject to the New START provisions as it is implemented. In particular, exactly this has happened to B-1B heavy bomber. Bombers of this type are not subject to the New START Treaty provisions anymore. They are not accounted toward aggregate limits on deployed warheads, deployed or non-deployed delivery systems. There are also no limits on deployment of B-1Bs. In particular these bombers could be deployed anywhere outside the U.S. national territory. The U.S. side is also not obliged to notify about B-1B movements.

The Russian side keeps concerns about the tendency of withdrawing from verification system those strategic arms, nuclear missions of which were abandoned. Thus, there is a need for a dialog on such conventional systems. I'd suggest that we call them strategic conventional arms. The problem of strategic conventional arms is one of the three issues (the other two are ballistic missile defenses and non-strategic nuclear weapons) which need to be resolved to pave the way to further nuclear cuts.

What types of arms should be included in the category of strategic conventional arms?

Those arms that retain such technical capabilities as covertness, high precision, and relatively short time for reaching their targets. In the context of US-Russian relations and taking into account the New START provisions, these arms may include conventional intercontinental (ICBMs) and submarine launched (SLBMs) ballistic missiles, missiles deployed in converted launchers of ballistic missile submarines, B-2 and B-52 heavy bombers converted for carrying conventional weapons. Prompt Global Strike (PGS) systems should be definitely discussed as there is a clear concern by the Russian side. B-1B heavy bombers also need to be considered as strategic. Finally, long range SLCMs deployed on submarines and surface ships might be also a subject of discussions.

One have to admit that the Russian side did not explicitly articulate which types of arms besides non-nuclear ICBMs, non-nuclear SLBMs and PGS systems it considers as strategic conventional. Russia prefers to keep ambiguity with respect to conventional heavy bombers, long range air and sea launched cruise missiles. Some Russian military experts admit that these weapons might have counterforce capabilities, and therefore may become a significant destabilizing factor.

In contrast to Russian experts, just a few our Western colleagues share the view that strategic conventional arms need to be accounted for at further nuclear cuts. In this respect I'd like to welcome the proposal made by Dr. James Acton that U.S. and Russian experts would jointly study vulnerability of missile silos to conventional cruise missile attacks.

However, in my view it would be extremely difficult to come to a common answer. Both, proving that either long range conventional SLCMs threaten to silo ICBMs or they pose no threat at all are a challenge. Let me illustrate my point on the following example.

One may agree completely with the conclusion that high-explosive blast-fragmentation munitions pose no threat to silo launchers. But it would be a mistake to assess capabilities of conventional munitions against ICBM silos by considering a blast effect of the warhead or bomb explosion as a primary mechanism for destruction, as some analysts frequently do in their attempts. Usually they compare their results with the maximum overpressure that the silo can withstand. Not surprisingly, such analysts come to the conclusion that the warhead has to carry a lot of explosives and has to be extremely accurate to be able to destruct an ICBM silo.

In fact, if penetrators or shaped charge types of weapons are used, the main destruction mechanism is different. It is the kinetic effect of a warhead or the liquid metal jet. The results of such an impact could be very significant. 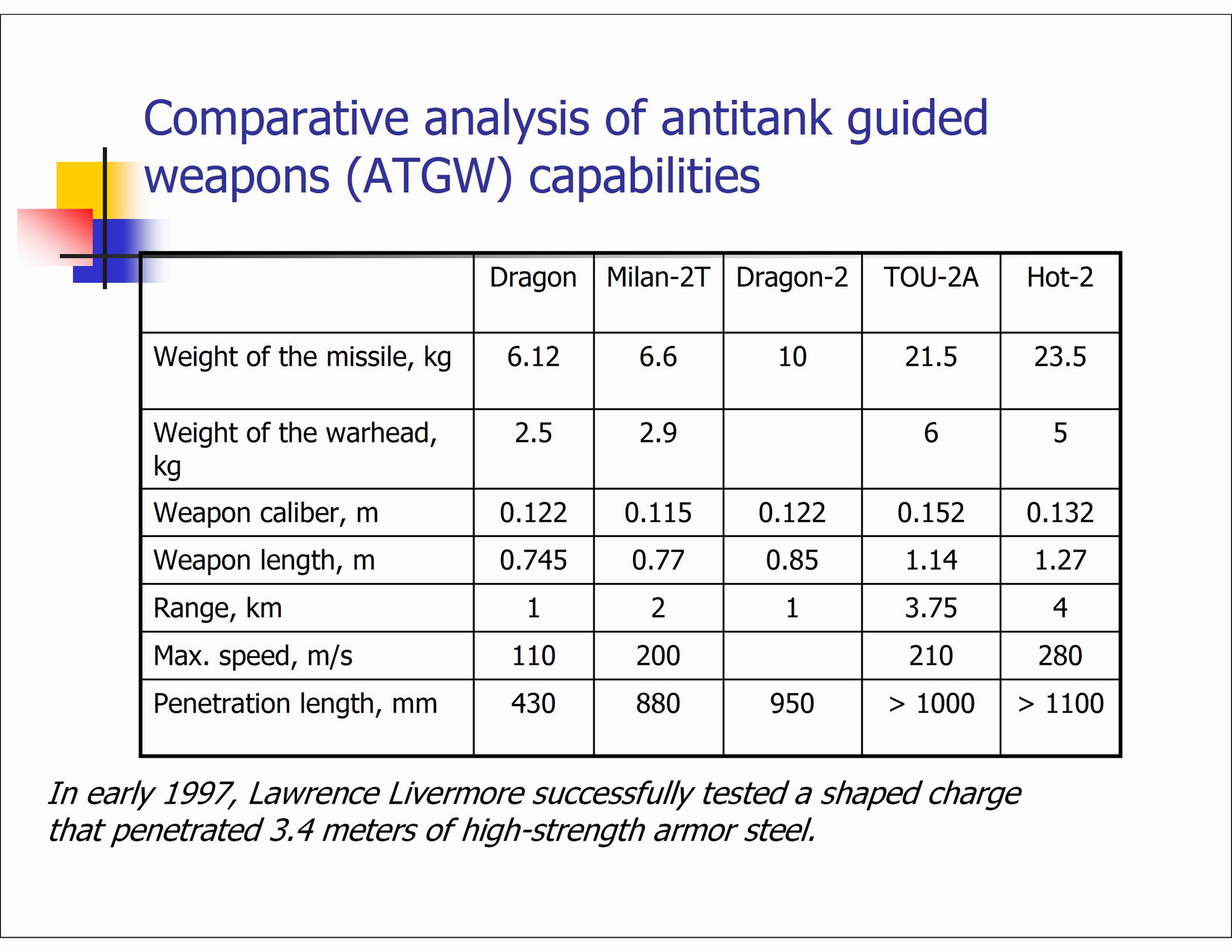 In particular, although the warheads of guided anti-tank missiles weigh only a few kilograms each, they are capable of penetrating armor that is more than one meter thick (see Figure 1). Let me also mention that the U.S. Navy is currently pursuing the Multi Effects Warhead System (MEWS) program aimed at developing a tandem shaped charge warhead for the Tomahawk cruise missile. Such kind of warhead may become very capable against hard targets like an ICBM silo. 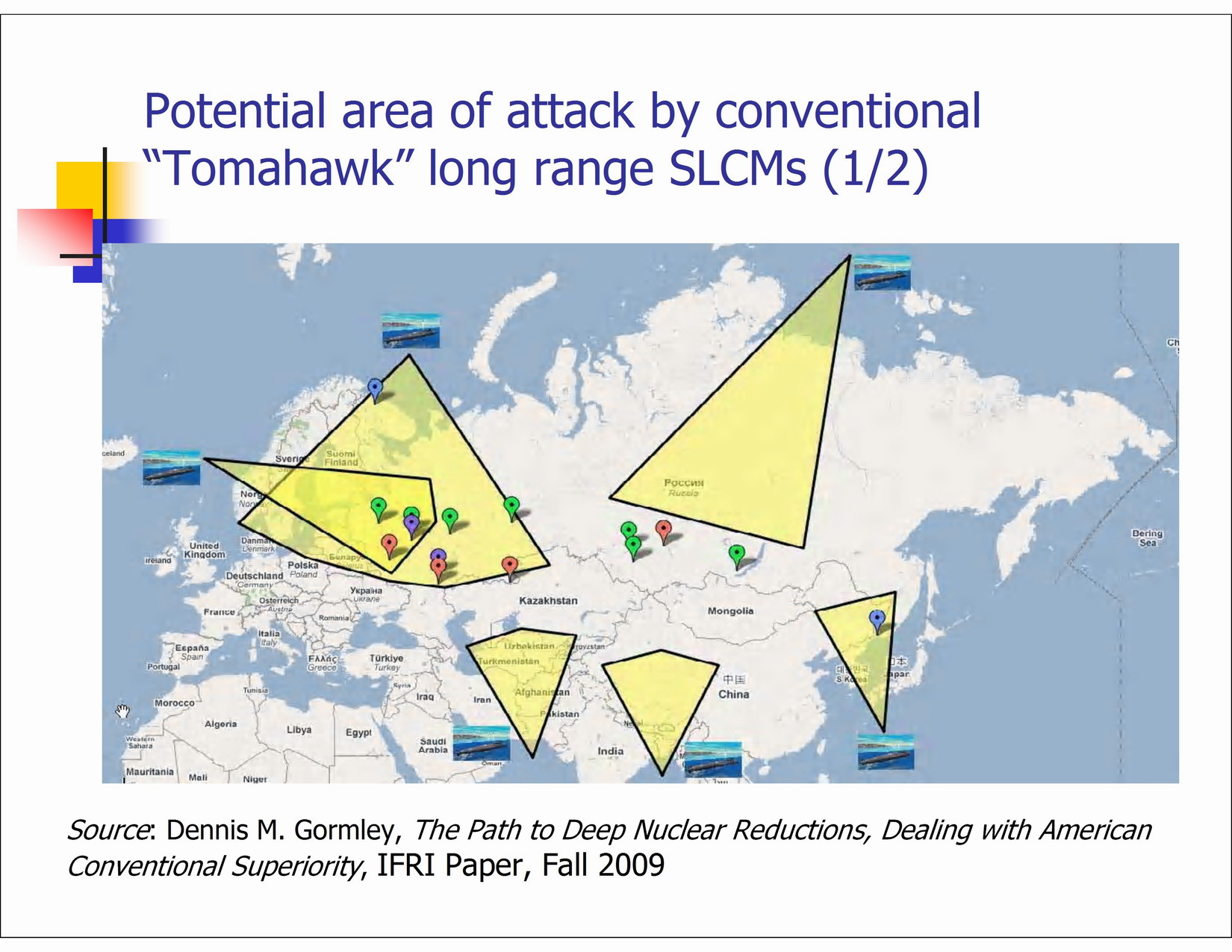 The paper by Gormley also concludes that the 2,500 kilometer maximum range of Tomahawk missiles would allow them to reach only nine of the 14 Russian ICBM target areas (see the Figure 2). At the same time, the author makes an assumption that U.S. submarines carrying cruise missiles would remain confined to an area just outside the 200-mile exclusive economic zone of any of the regional nations.

The reliable detection of modern strategic nuclear submarines, particularly in shallow waters, represents a fundamentally complex problem. It is interesting that the Soviet Navy, the second in the world, never had the ability to reliably monitor its underwater environment under any weather conditions, even within the twelve mile zone, as evidenced by the numerous collisions between submarines.

Over the past two decades, the Russian Navy has not improved its effectiveness in controlling the situation under the sea surface. Thus, the assumption that a disarming strike against Russian ICBM target areas would come from beyond the 200-mile limit remains unconvincing.

In fact, considering the actual state of affairs when it comes to Russian capabilities in defending against cruise missile submarines, the opposite is more likely: the Russian military would be more concerned about an SLCM strike coming from a minimal distance from shore.

Possible launch areas for such cruise missiles are shown on the Figure 3 which demonstrates that a missile having a range of 2,500 kilometers would have little trouble reaching all of its potential targets.

Let me stop here. I'd be glad to answer to your questions.